Nestled along the borders of China and Russia are three provinces of Dornod, Khentii and Sukhbaatar. Expect for the Khentii Nuruu mountain range, and some forests surrounding it, eastern Mongolia is pure steppe plain. Travelers those who go east are rewarded with some stunning scenery, one of the world's last great undisturbed grasslands and several historical sites closely linked Genghis Khan. 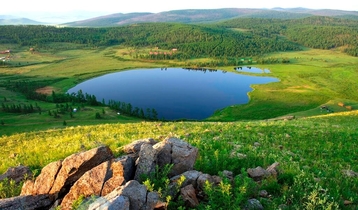 Lake Khukh Nuur is located about 215 km (134 miles) to the east from Ulaanbaatar. Khukh Nuur consists of two lakes - linked underground - and the surrounding area is considered a place of outstanding natural beauty. Surrounded by the Khar Zurkhen Mountains, Lake Khukh Nuur is mentioned in The Secret history of the Mongols and is believed to be the place where Temujin was enthroned as a king of united tribes and was given a title Genghis Khan. There is a memorial complex here dedicated to the 840-year birth anniversary of Genghis Khan. 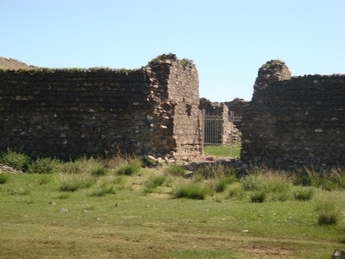 Located in Batshireet soum of Khentii province, sacred Binder Mountain and its associated cultural heritage sites are inseparable part of the Khentii Mountain range in center of which the Mongolian most sacred mountain Burkhan Khaldun is situated. There are many cultural, archaeological and worship vestiges dated from Pala eolithic period through the Bronze, Iron Ages and the successive historical periods including the Binder Ovoo (cairn) of the sacred Binder Mountain, stone aged archaeological sites of Rashaan Khad, the huge number of burial and ceremonial sites, deer stones and rock arts. The Uglugchiin Kherem or Almsgiver’s Wall is situated 8-10 km from the Binder Ovoo. This stone masonry wall with a length of approximately 3 km is laid out orderly and accurately supporting the mountain. Mongolian historian Kh. Perlee supposed that the site dates back to the Kitan Empire relying on findings and fragments of clay potteries discovered from the site. 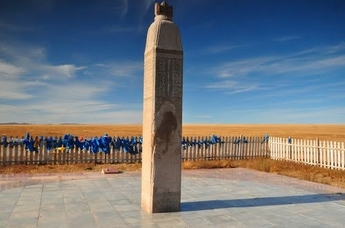 Khuduu Aral of Kherlen river and surrounding cultural landscape covers the most part of Delgerkhaan village of Khentii province and lays between Kherlen river (from west and south), and Tsenkher river (from east) and covers over 100.000-hectare area. Proposed property Archaeological Site at Khuduu Aral and Surrounding Cultural Landscape is the cradle land of the Mongolian Empire. The Avargiin Balgas (Ruins of Avarga) – ancient ruins, formerly called Ikh Aurug Ordo (Great Aurug Palace) was a main palace, built during the Genghis Khan time, is located at the Khuduu Aral. It was not only the palace of Genghis Khan, but also the place where some of his successors were enthroned, and was political and economic center of the Great Mongolian Empire during its first stage.

At Khuduu Aral Mongolian kings – Genghis, Ugudei, Munkh, Esuntumur and so on – took their thrones and state affairs were negotiated and settled by the Supreme Council (Ikh Khuraldai). Also an outstanding historical and literary work the “Secret History of Mongols” was finished writing and the Eight Ceremonial White Gers (traditional Mongolian dwelling) stayed and worshipped until the 15th century. 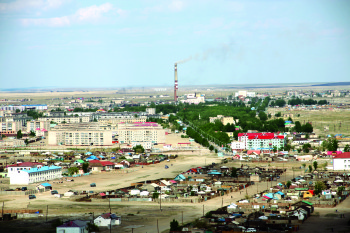 It is the capital of the province of Dornod and the fourth-largest city in Mongolia after Ulaanbaatar, Darkhan, and Erdenet.   The name of the city was Bayan Tumen until 1941, when it was renamed after the communist leader Khorloogiin Choibalsan. The city administrative unit's official name is Kherlen sum, with area of 281 square kilometres or 108 square miles. It is situated at the Kherlen River, at an elevation of 747 metres or 2,451 feet above sea level. There are many statues such as statue of Choibalsan, who were Marshall of Mongolia, statue of Soviet pilots,  statue of N.F.Gastello, Soviet Hero,  statue of General Kurilatkin and Memorial statue  in the Choibalsan city. 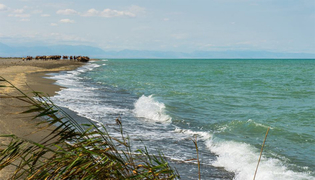 Buir lake is the largest freshwater lake in eastern Mongolia, part of the basin of the large Amur river, together with many associated small lakes - northeastern parts of the system outside the Ramsar Site boundary lie across the border with China. This transitional habitat between Daguur and Stipa steppes features flora and fauna characteristic of arid steppe; it regulates the Khalk gol River and the Buir lake's water regime and protects the origins of many small rivers, lakes, streams, and springs. The site is a main grazing land for the Mongolian gazelle, a stop-over and permanent ground for more than 236 bird species. The Buir Lake is an important local fishing site where Amur carp, mirror carp. Amur grayling, lenok, khadary, burbot, whitefish and others are found in abundance. 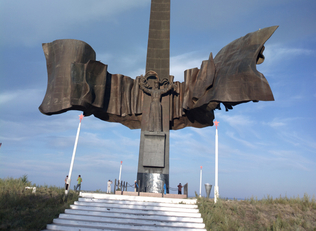 History comes to life at Khalkh Gol, the battlefield during 1939 between Mongolian and Soviet Russian allied forces and Japanese troops. Also Khalkh gol is a village of the border with China.  The village has the headquarters of the border guard district. Khalkh gol river which flowed out of the border zone, about 150 km away from the village, flows slowly to the eastern of the village and flows into the Buir lake, after going through China and Russia, to the Amur river reach the Okhotsk Sea a long way. There are Soviet and Mongolian army victory monument on the hill which can see the whole village.  There are local museum, the monument of 90 ten heroes, the Mongolian warrior monument, the wall monument, The Soviet troops tanker warrior monument and other numerous war memorial marks in the village.