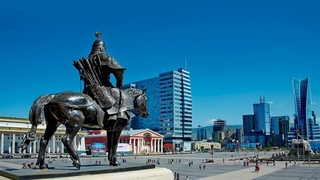 Sukhbaatar  Square is the central square of Mongolia’s capital Ulaanbaatar. The central square dominated by the Mongolian parliament building is surrounded by old and in some cases crumbling Soviet style buildings such as Opera house, Central post office together with an ultramodern blue glass hotel that soars like a spinaker in a full breeze.  In front of the Government building, a large statue of Genghis Khan proudly stands outside of the building, and  equẹstrian of Mongol Empire’s army leaders and Genghis Khan’s son and grandson. The bronze statue of  Sukhbaatar stands at the center of square. Then square is named after Sukhbaatar. Today square is occasionally used for rallies, ceremonies and even rock concerts and festivals. Therefore, central square is popular place for city residents, not only travelers 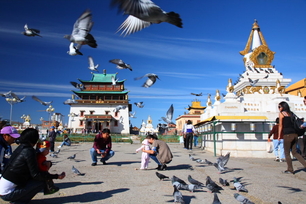 Gandantegchinlen Monastry is the Mongolians main religious center. The full name, Gandantegchinlen, translates roughly as ‘the great place of complete joy’. Today more than 600 monks belong to the monastery.

As you enter the main entrance from the south, a path leads towards the right to a courtyard containing two temples. The northeast building is Ochidara Temple, where the most significant ceremonies are held. As you follow the kora (pilgrim) path clockwise around this building, you see a large statue behind glass of Tsongkhapa. The two-storey Didan-Lavran Temple in the courtyard was home to the 13th Dalai Lama during his stay here in 1904. At the end of the main path as you enter is the magnificent white Migjid Janraisig Süm, the monastery’s main attraction. Lining the walls of the temple are hundreds of images of Ayush, the Buddha of Longevity, which stare through the gloom to the magnificent Migjid Janraisig statue. The original statue was commissioned by the eighth Bogd Khan in 1911, the new statue was dedicated in 1996 and built with donations from Japan and Nepal. To the east of the temple are four colleges of Buddhist philosophy, to the west of the temple is the Öndör Gegeen Zanabazar Buddhist University. 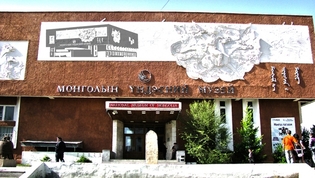 This is the biggest historical museum in Mongolia. Exhibitions cover prehistory, pre-Mongol Empire history, Mongol Empire, Mongolia during Qing rule, ethnography and traditional life, and twentieth-century history. The ethnographic collection has significant displays of the traditional dress of various Mongolian ethnic groups and of snuff bottles.The most popular exhibits are the monuments of Kultigen, great leader of Uigar Empire and traditional costumes of ethnic groups of Mongolia. 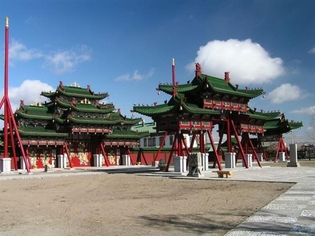 Built in between 1893 and 1903, this place is where Mongolia’s eighth Living Buddha, and last king Jebtzun Damba Hutagt eighth (Often called the Bogd Khan), lived for 20 years. This palace has 6 temples within it featuring sculptures and paintings.The summer palace, on the banks of Tuul Gol, was completely destroyed. There are six temples in the grounds.each now contains Buddhist artworks, including sculptures and thangkas. The white, Western-looking building to the right as you enter is the Winter Palace. The Bogd Khan’s penchant for unusual wildlife explains the extraordinary array of stuffed animals in the palace.

Built in 1904-1908 by the Eighth Bogd Khaan Jebzundamba (the theocratic ruler of Mongolia) and dedicated to his brother the Choijin Lama Luvsanhaidav, the temple complex is now a museum preserving the elaborately decorated interiors and containing a rich collection of other Mongolian Buddhist sculpture and painting. It has several gilded bronze statues (at least one attributed to Zanabazar, the first Bogd Jebzundamba), impressive sculptures of the major Mongolian/Tibetan incarnations of the Buddhist deities, and a striking array of papier-mache masks used for the Tsam dance ceremonies. 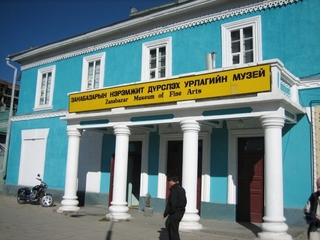 The selection presented here highlights the exquisite sculptures in metal of the school of Zanabazar, the most important religious and political leader in Mongolia in the late 17th century. Other highlights of this selection are from the outstanding collection of scroll paintings or tankas, and the papier-mache masks sculpted for the ritual Tsam dances. In a few instances I do not have fullcaptions. 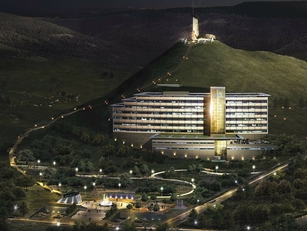 Zaisan Memorial is comprised of two sections; the tank at the bottom of the hill the memorial statue at the top of six hundred steps. It is a massive statue a memorial to Soviet soldiers killed in Khalk Gol battles in 1939 during the World War II. From the top of the hill it sits on you can look down on the whole city, which sits in a basin surrounded by 4 mountains - Bogd Khan, Chingeltei, Bayanzurkh and Songino Khairkhan.

The tank memorial details the route that the tank made with grants from Mongolian people, took from Moscow to Berlin between 1943 to 1945. To the right of the tank, there is a concrete mural of three Russian and Mongilian soldiers. 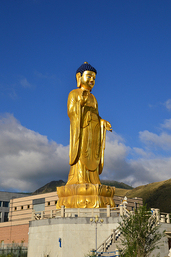 It's a nice spot, worth a visit if you are spending a bit of time visiting the nearby Buddha vista shopping area or the Zaisan Memorial. You will see a lot of people taking wedding photos here if you are in the city in peak season. Park has been built in 2006 is located in base of Zaisan memorial. 16 meters tall Sakyamun is standing in center of the park.